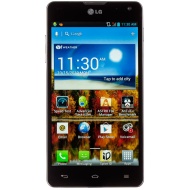 Poor battery life ; No microSD card slot ; Interface can be a little messy

Poor battery life and the lack of a microSD card slot are downsides, but the 4G-capable Optimus G is fast, well-designed and has some handy software features. It's definitely LG's best smartphone ever.

With the dust barely settled after the Korean LG Optimus G's run around out review track, we have its LTE packing, US siblings on our hands. The LG Optimus G E970 for AT&T and its LS970 relative for Sprint are the two versions which are offered across...

LG has made a massive leap forward in the United States with both the Optimus G for AT&T and its sibling for Sprint Wireless. In the past, the LG devices hardly topped any sale charts. This time around however, the LG Optimus G deserves a spot at the...

AT&T s Optimus G inherits the performance of its Korean sibling but suffers from excessive carrier customization, including a downgraded 8 MP camera.

LG has shown a serious commitment to pushing the limits of Android hardware. The first dual-core droid was manufactured by the Koreans and, while they showed up late to the quad-core party, they're back with a bang with the Optimus G - the first phone...

The LG Optimus G for AT&T is a quad-core beast, but a disappointing camera and heating issues hold it back from smartphone perfection.

We're not big fans of superlatives, but for LG's flagship phone of the season, we'll make an exception. Sprint's LG Optimus G is the best phone from the company, which is saying a lot considering its string of ho-hum handsets that were good but not...

The Optimus G doesn't have a microSD card slot, its battery drained fairly quickly, and sounds from the audio speaker were harsh.

Despite its short battery life, Sprint's LG Optimus G is the best LG phone on the market due to its zippy processor, lovely display, and 13-megapixel camera.

(Next page: Camera, Multimedia and Conclusions )

In the Android world right now, all eyes are on LG. After years of sub-par products, the company has found relevance again with the Optimus G, garnering serious attention from US carriers and...

An awesome phone, but a little too late?

If the Optimus G had landed last year, it would be a stand-out. In 2013, it risks being lost in the pack.

Poor battery life ; No microSD card slot ; Interface can be a little messy