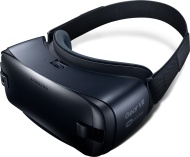 An immersive 360-degree viewing experience that's heavy on the nose

Heavy to wear ; Limited to about 10min of use before becoming uncomfortable ; Can drain the smartphone's battery quickly

Samsung has made a habit of giving its Gear VR headset minor updates with every flagship phone launch. And it's done the same for the new Galaxy S8 and S8+ – although not a whole lot has changed.

For anyone interested in purchasing a VR headset and who's already a Samsung flagship owner, the Gear VR is a no-brainer. It's easy to use and the content selection keeps growing. There's plenty of appeal here.

There aren't many pieces of technology that literally make people's jaw drop. That make friends say, "let me see that again." That make kids feel like they're in Disneyland. That make moms and dads and grandparents go, "wow, I can't believe this."

Some panoramic videos still look pixelated compared to what you'd experience on a high-end phone or tablet; only works with particular Samsung phones; won't work with Google Cardboard apps.

While it might soon be eclipsed by more robust competitors, the Samsung Gear VR still amazes as the most impressive virtual reality you can buy right now.

I'm watching a movie trailer for "Interstellar." Large cornfields, distant mountains from far-off worlds. But I'm in a movie theater, watching these vistas. All around me are empty seats. The projector, far behind me, flickers. I reach for my armrest....

It's a relatively affordable VR accessory; it creates a better-than-expected sense of immersion using a Note 4 as its screen and engine; apps, while limited, are all free. And it's actually available to purchase now.

It only works with the Samsung Galaxy Note 4; the app assortment consists mainly of demos and quick minigames; its video resolution in VR still grainy, compared with TVs and tablets. It doesn't work with full-fledged PC-based Oculus software.

The Gear VR Innovator Edition is a cool -- and very promising -- entry ticket for early adopters looking for an affordable taste of virtual reality.

VR, or virtual reality, has a long and winding history. From the distant dream of Sega's VR, unveiled back in 1993, to the modern day it's-almost-here reality of Oculus Rift, it's Korean giant Samsung that's now here to, well, try and sell some more...

Wire-free VR experience unlike its rivals, optical adjustment, easy to setup and use, some fun experiences on offer

The first time we slipped the Gear VR on and literally looked around a whole virtual galaxy, head turning to take in what was to the side and behind, a part of us was impressed with the sheer spectacle. It's quite amazing.

The Samsung Gear VR is not like other virtual reality headsets. Unlike Oculus Rift or Sony Morpheus, the Gear VR doesn't come with any display built-in

Smaller, lighter... but exactly the same

VR still has a long way to go, and not a lot of people will buy this... but if you buy an S6 you definitely should think about it.

An immersive 360-degree viewing experience that's heavy on the nose

Heavy to wear ; Limited to about 10min of use before becoming uncomfortable ; Can drain the smartphone's battery quickly

It’s open season and the most popular hunting franchise on mobile is coming to the Oculus virtual reality platform! Immerse yourself in the fun and excitement of Deer Hunter within a 360-degree virtual reality environment. Experience the sights and...